My father was Dominican and my mother from the Bahamas.  – Arthur O. Eve 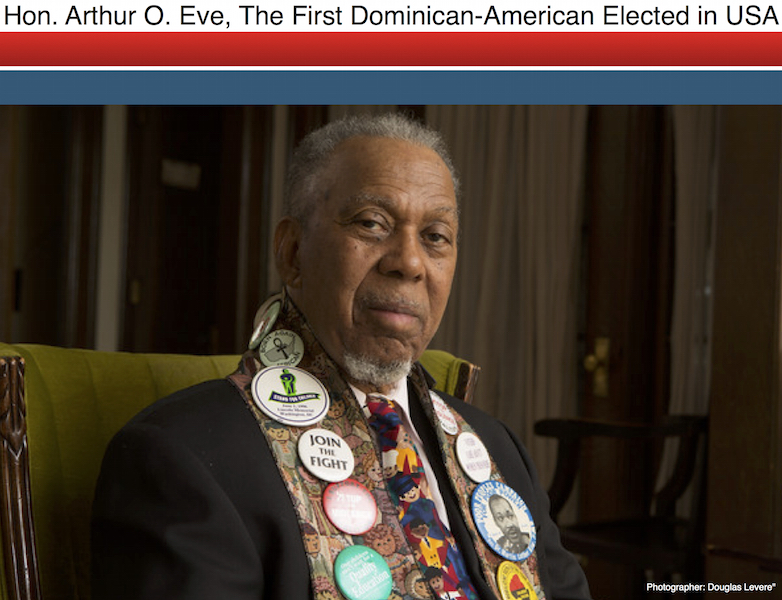 Newark—The Institute for Latino Studies (ILS), dedicated to quality research for advocacy, dusts off its research archives to unveil a little known fact revealing that well-known, retired NYS Assemblyman Arthur O. Eve praised for many years as being one of the first and highest ranking African Americans in the New York State Legislature, is of Dominican ancestry.

Although it has not been promoted widely, many in New York political circles have known and whispered at public functions the fact that Arthur O. Eve holds the historic distinction of being indeed the first Dominican elected to public office in the United States of America.

Eve who served as NYS Assembly member for 36 years, has been nominated to receive The Illustrious Lifetime Achievement Awards for Service in Politics.

The Illustrious Awards document and highlight the contributions of Latino icons to the advancement of the United States of America and its diverse communities. The Awards Ceremony will take place on Saturday, September 24, 2016 at 6pm at Rutgers University Robeson Campus Center located at 350 Dr. Martin Luther King, Jr., Blvd Newark, NJ 07102.

ILS research conducted by Nestor Montilla, Sr. indicates that Eve’s father, Arthur B. Eve Sr., was born in 1912 in Puerto Plata, a province on the northern cost of the Dominican Republic, one of the places where thousands of free African American slaves settled in 1824-25. His mother, Ruby Wilson Eve, was from the Bahamas in the Caribbean.

“My father was Dominican and my mother from the Bahamas,” he stated to Montilla.

According to Montilla, in the 1920s, in the midst of the 8-year US occupation of the Dominican Republic, Eve, Sr., his seven siblings and their parents, immigrated from Puerto Plata, Dominican Republic to Miami, Florida, where they settled. Subsequently, in his early twenties, Eve, Sr. moved with his wife and her mother to New York City, where his son Arthur O. Eve was born on March 23, 1933.

When Eve was six years old, his parents separated; his mother and grandmother returned to Miami, Florida, where they were from. She took her son and mother with her, and both raised him in public housing at Liberty City in Miami, Fl.   After graduating from high school and pursuing studies at West Virginia State College, Eve graduated with an associate’s degree and a bachelor’s degree. He then moved to Buffalo, NY in 1953 were jobs were plentiful, primarily in the automobile industry. He has lived there until today.

After working for the Metropolitan Life Insurance Co. in New York City, Eve, Sr., retired in 1975. He then moved to Conway, one of the oldest towns in South Carolina; where he became a member of the Mount Olive Baptist Church and also of Prince Hall Masons. He kept close ties with his son, grandchildren and great-grandchildren by traveling to Buffalo. Following a long illness, Eve Sr. passed away on May 19, 1992 in Conway, S.C. where his remains rest in peace.

His son Eve served in the United States Army from 1953-1955 and then decided to change career path and become a politician. He got involved in the community until he was elected New York State Assemblyman in 1966 to represent Buffalo, one of the poorest cities in the United States. He served along 36 years in the New York State Assembly, longer than any other incumbent member (1967-1982, 1983-2002). Eve rose to prominence in the mid-1960s during Buffalo’s civil disturbances. He expanded his notability during the Attica Prison Riots. In Buffalo’s Civil Rights Movement riots, Eve attempted to organize formal meetings in order to avert physical confrontations. During his first term he led the effort to obtain an initial $500,000 of funding to establish the State University of New York system’s SEEK/Educational Opportunity Program.

Eve is recognized as a leader on just about every issue that’s important to families. Many believe that during his career of public service Eve has done more to initiate opportunities for minorities and the economically disadvantaged in the field of educational opportunity, undergraduate and graduate education, medical degrees, pre-natal, day care and infant care, than any other state legislator in the nation.

He is the recipient of numerous awards and citations from an array of local, state and national organizations.

Eve was the first Dominican to win the Democratic Party’s Buffalo Mayoral primary election. During his time in office he was one of the highest ranking members of the New York State Legislature.

The Illustrious Awards Ceremony, a signature initiative of The Institute for Latino Studies, documents and highlights the contributions of Latinos to the advancement of the United States of America and its diverse communities. The contributions of Latino icons are video-featured and honored in a professionally produced formal ceremony and Collectible Tribute Journal.

The Institute’s Illustrious Awards Selection Committee, composed by representatives of the judged fields of work, selects three finalists per category, based on the following criteria:

1. Nominee must be of Latino descent and residing in the United States
2. Nominee has at least twenty years of experience in her/his field (years of experience may be substituted 5 years per 1 major accomplishment)
3. Nominee must have at least one major accomplishment in her/his field
The honoree in each category will be the finalist with the highest point average in judged areas.

Nominations are still open until June 30, 2016. To submit your nominations, visit www.illustriousawards.com or via www.instituteforlatinostudies.org