The Reality of Our Legacy in USA 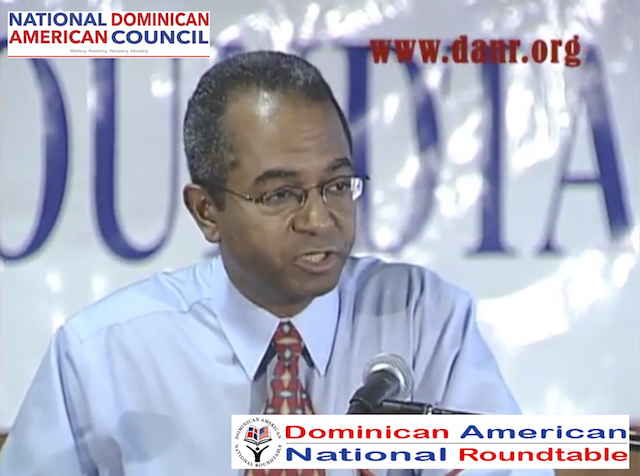 CODA’s theme this year is Claiming Our Legacy in USA/ Afirmando Nuestro Legado.

“We are pleased to have Dr. Silvio Torres-Saillant as CODA’s keynote speaker this year,” said Dr. Maria Teresa Montilla, President of the Institute for Latino Studies, Research & Development. “The Conference’s Keynote, entitled The Reality of Our Legacy in USA, will update a remarkable speech Dr. Torres-Saillant delivered at City College of The City University of New York at the Dominican American National Roundtable’s 2004 Annual Conference.”

In preparation to hear Dr. Torres-Saillant at the 17th Annual Conference on Dominican Affairs, and for background information, his 2004 speech is available via: https://www.youtube.com/watch?v=s47L1ewtYBY

In his 2004 remarks, Dr. Torres-Saillant said: “Some honorables in the city and the state have been known to ventilate anti-Dominican sentiments. For them, one Dominican in their midst is simply too many Dominicans. I empathize with the tenue predicament of our political leadership as they enter the corridors of power in the legislative or in the policy-making structures of school systems…Dominicans are suspects…”

“Dr. Torres-Saillant will address an audience of over 300 attendees from the tristate area, and beyond, including Maryland, Connecticut, Providence, Massachusetts, Pennsylvania, Florida, Puerto Rico, and the Dominican Republic,” said Nestor Montilla, Sr., Chairman of the National Dominican American Council (NDAC). “Join us in welcoming one of our most widely respected scholars: Dr. Silvio Torres-Saillant from Syracuse University.”

Abraham Lincoln once said “The best way to predict your future is to create it.” Considering the meaning of this quote and the past and present socio-economic and political realities of the Dominican and Latino communities in USA, conference discussions, guided by Néstor Montilla, Sr., will center on the universal claim that Legacy is the most valuable gift in building the future.

This year, to continue with its quest towards helping create a better future for all, the Institute for Latino Studies has partnered with UNIVISION, Rutgers University, The National Dominican American Council (NDAC), Dominican American National Roundtable (DANR), General Consulate of Israel, PSE&G, and several other organizations to make its 17th Annual Conference on Dominican Affairs a rewarding and memorable event. CODA is the only state-wide conference in the United States where Dominicans, leaders and scholars are convened under one roof to discuss critical issues impacting U.S. diverse communities.

To register for the conference click here or visit: www.instituteforlatinostudies.org

For a printable copy of the conference program, click CODA 2017 Program

Dean’s Professor in the Humanities

Silvio Torres-Saillant, Professor in the English Department, formerly headed the Latino-Latin American Studies Program in the College of Arts and Sciences. He co-founded La Casita Cultural Center, an organization opened in the Near West Side of the City of Syracuse with the mission to create bridges of communication, collaboration, and exchange linking Syracuse University with the Latino population of the city and promoting the Hispanic heritages of Central New York. He has served in the core team of DK (Democratizing Knowledge), an initiative supported by the Chancellor’s Leadership Projects that promotes strategies for decolonizing the academy, and in the Syracuse University chapter of The Future of Minority Studies, a nationwide consortium of scholars working on efforts to foreground the ways of knowing and bodies of knowledge subjugated by the colonial transaction. He completed a two-year term as William P. Tolley Distinguished Teaching Professor in the Humanities.

Professor Torres-Saillant came to Syracuse after having founded the CUNY Dominican Studies Institute, a prestigious interdisciplinary research unit located in the City College of New York. He had his first full-time faculty position in the English Department of Hostos Community College, CUNY, and has held visiting appointments at Amherst College, Harvard University, the University of Cartagena, and the San Andrés campus of Colombia’s Universidad Nacional.

Torres-Saillant has served in the Delegate Assembly of the MLA, has chaired the MLA Committee on the Literatures of Peoples of Color in the United States and Canada and the selection committee for MLA Prize in Latino and Latina/Chicano and Chicana Literary and Cultural Studies, has served in the selection committee for the Senior Fulbright Scholar Program in Central America, Mexico, and the Caribbean, has formed part of the Board of Directors of the New York Council for the Humanities, inter alia. A member of the Editorial Board of the University of Houston’s Recovering the US Hispanic Literary Heritage Project, he serves as Associate Editor of Latino Studies (Palgrave) and has edited the New World Studies Series for the University of Virginia Press.

Research and Teaching Interests
Professor Torres-Saillant’s research and teaching interests revolve around some central concerns pertaining to the enduring legacy of the colonial transaction spearheaded by the Christian West starting over five centuries ago. They have to do with the relations of power that make bodies of knowledge unequal across regions, languages, and cultures of the world. They involve the disparate value attached in the academy to ideas and ways of knowing depending on the geopolitical location of their producers. They respond to the continuing monopoly that the Christian West holds over the authority to define the human. As such, his research and teaching projects touch on race, ethnicity, intellectual history, imperial violence, the problem of culture and civilization, diaspora, migration, the tension between the ethnic and the human, and the necessity to interrupt the logic of maltreatment that informs the corporate capitalist system spawned by the colonial transaction.

Recent Courses
Professor Torres-Saillant has recently taught “Literature of the New American,” a course that surveys the writings of American authors of Native, African, Asian, Hispanic, Jewish, Irish, and Italian descent; “Transatlantic Letters,” a course that traces the cultural history produced by the colonial encounter of Spanish and British settlers from 1513 to 1940 in the territory now known as the United States; “Literature of the Caribbean Diaspora,” a course that examines interconnections  among the literary productions of Caribbean-descended writers from the United States, Canada, England, France, the Netherlands, and Spain; “Latino Fiction, “ a course that surveys the literary works of American writers of Hispanic descent from Maria Amparo Ruiz de Burton to Justin Torres; “The Latino autobiography,” a course that explores the difficulties involved in the study of life-writing and in placing Latino-ness as a stable social identity; and “Living in a Diverse Society,” a course that deals with diversity as an academic subject, designed for students in the Multicultural Living and Learning Community.

The Institute for Latino Studies (ILS), dedicated to quality research and advocacy for a better society, is a non-profit entity recognized by the federal government as a 501 (c) (3) organization. ILS believes that a solid understanding of cultural self-identity and people’s socio-economic realities is very important within a multi-cultural society focused on the healthy and productive development of its communities. www.instituteforlatinostudies.org

The Dominican American National Roundtable (DANR) is the only national nonprofit, nonpartisan organization based in Washington, DC, advocating for the socio-economic and civic development of Dominicans in the United States. DANR is presided over by a National Board of Directors led by an executive committee composed of a president, a vice president, a youth president, a chairman, a treasurer, and a vice president representing Puerto Rico and the U.S. Virgin Islands. www.danr.org

The National Dominican American Council (NDAC) is a civic-community-engagement and public relations entity composed of local member councils in the United States and territories, including Puerto Rico and the Virgin Islands, with the role of setting the national agenda and working jointly with the Dominican American National Roundtable (DANR) and progressive entities advocating for the socio-economic and political enfranchisement of all Latinos and Dominican-Americans in areas concerning education, economic development, health, immigration and community empowerment. www.ndac-us.org

The Latino Leadership Alliance of New Jersey is the largest and only statewide non-partisan non-profit organization composed of local, regional and state community-based organizations, leaders and professionals advocating for the socio-economic and political development of Latino diverse communities.