The speech lasts about 49 minutes and it is available online via: https://www.youtube.com/watch?v=IjtoWcIWXWk&feature=emb_logo 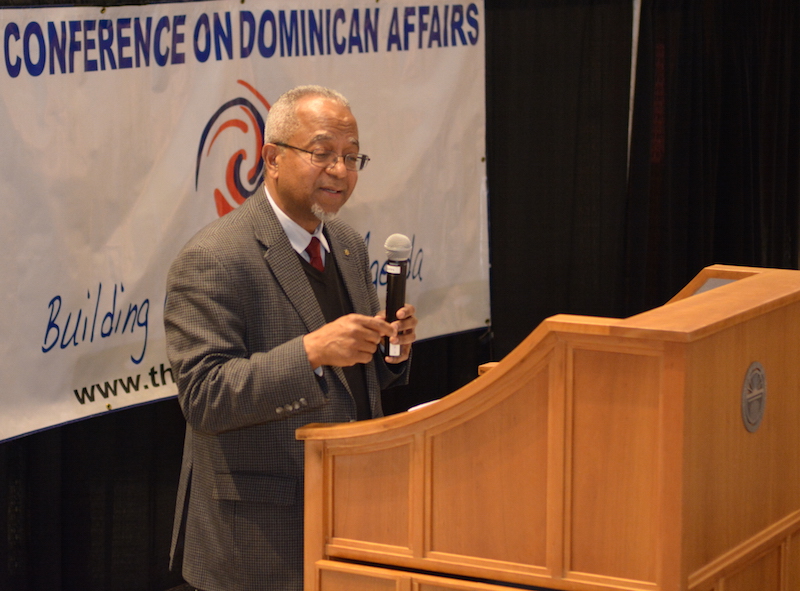 Thank you! I am very pleased to be here. I am very grateful to have this opportunity to address this impressive gathering of distinguished guests who come from near and far to attend this 17th Annual Conference on Dominican Affairs hosted by the National Dominican American Council and the Institute for Latino Studies, Research and Development.

Council’s Chairman Nestor Montilla, Sr., and Institute’s President Maria Teresa Montilla have done me a great honor by asking me to share some thoughts with you as the keynote speaker.

I would like to begin by expressing appreciation for the work that Nestor and Maria Teresa have done over the years for people of Dominican descent in the United States.

Through the Council, the Institute and the Dominican American National Roundtable, they have contributed enormously to make Dominicans part of a nation-wide discourse on the future of this country and our place in it as agents of change.

It seems to me clear that many of the gains we have made on the electoral markets on the rights of many of our co-ethnics to position of prominence in the municipal, state and federal spheres of government have benefited from the measures of devotion they have invested in creating fora of various sort to advance a dialogue that expands our views of what is politically possible for us as an ethnic community.

So I ask for them a warm round of applause.

And among other things, Nestor has established himself as a bonafide historian of Dominicans in public life; unearthing the story of Arthur O. Eve, a retired lawmaker who we now regard as pioneering the Dominican presence in the New York State Legislature having been elected to the Assembly in 1966 and serving for 36 consecutive and productive years.

As a scholar, I deeply appreciate Nestor’s good efforts to help us complete the story of our presence in this country’s political arena.

Indeed, establishing the longevity of a Dominican presence in the various walks of life in US society has long been a key component of our advocacy as a community, giving that in this country, minority groups often find themselves competing for attention to their social plight.

Historical longevity can serve as political credentials. Assuming them to have come to the United States just the other day as birds of passage with no intention to set down roots in this country, which meant they couldn’t possible have acquired US citizenship.

A legislator, until quite recently, could ignore the needs of the Dominican residents in his or her own district. The thought was that since their numerical presence did not translate into votes that could effect the public officials’ bid for reelection, it just didn’t matter that they were there.

As a result, the Dominican Studies Institute, among other initiatives, has long committed to an agenda of changing the “narrative of our recency” by disseminating information about how long the community has been around, and how significant their political participation as citizens has been for a long time.

Despite the Institute’s efforts, until just a while ago, the narrative of our being the new kids on the block, could still be heard reverberating from the voices of well-known characters in the media as recently as 2010.

For instance Democracy Now co-host Juan Gonzalez, as principal narrator of the 2010 documentary film Nueva York, a film on the history of the city’s relationship to the Hispanic world, emphatically abbreviated the story of Dominicans in this country: “There…he said categorically and I quote…”There was virtually no Dominican migration to the United States until the 1950s. None…none [he said with that emphasis], but once Trujillo was assassinated in 1961 and then, of course, after the US invasion of 1965, suddenly, then, thousands of Dominicans came to the United States.” End of quote.

Ironically, Gonzalez’s self-assured affirmation came in a documentary produced as a companion to an exhibition presented as a collaboration between the New York Historical Society and the Museo del Barrio., the show was called Nueva York 1613 through 1945, with 1613 referring to the year of the arrival year of the very first non-native American settler of the territory which later became New York, predating the arrival of the Dutch and the English, who would come much later.

The irony lies in the fact that that first settler happened to be a free mulatto from Santo Domingo named Juan Rodriguez. He was born in Hispaniola to a Portuguese sailor and an African woman.

You probably all know by now that as a result of the research conducted and disseminated by the Dominican Institute under the leadership of Dr. Ramona Hernandez with key support from Dominican members of the City Council in New York City. Now a stretch of Broadway from 159th Street through 218th Street in Manhattan, bares the name of Juan Rodriguez Way.

The Dominican Studies Institute wisely seeks upon the opportunity to make the story of Juan Rodriguez widely known, precisely because it saw it as a symbolic weapon to use against the narrative of recency that often play conversations about Dominicans in the United States. It actually seems recent that New York City should have become after Juan Rodriguez the primary destination for people coming from the Dominican Republic to the United States.

Juan Rodriguez was important as reinforcement to those fighting the narrative that shortens the length of the Dominican experience on the land, and that incorrectly abbreviates a history that goes back at least to the mid 19th Century.

The concern over the tale of recency corresponds to the well funded fear that allowing it to persist could have deleterious consequences on the community’s advancements.

There is the notion that the community consists of quintessential newcomers, who have not paid yet enough dues. If that narrative persists it could follow that we are maybe deemed ineligible for seeking equal empowerment. The idea is ‘you just came the other day’; we’ve been here for a along time; get online and wait your turn. What we are saying is that the calculation that has been made to determine who should be on the line…who should be in the back of the line or who should be at front is wrong and has to be corrected…

Full transcript will be made available here: www.instituteforlatinostudies.org

Dr. Torres-Saillant digs into his keynote speech by citing several instances illustrating the reality and challenges of the Dominican migratory experience in the United States. Stressing that media outlets and some characters have the tendency to use a questionable narrative of recency to illustrate the Dominican migratory experience as a paradigmatic case in the history of migration. He mentions, for instance, entrepreneur Fernando Mateo and how the New York Times depicted his life story and frequent traveling to the Dominican Republic to convey that Dominicans were not interested in building roots in USA.

He also mentioned the case of newly elected Congressman Adriano Espaillat who dared to apply to be a member of the Black Congressional Caucus. Dr. Torres-Saillant explained that the Caucus is still evaluating Espaillat’s membership application due to his insufficient blackness. The audience burst into laughter, as Dr. Torres-Saillant kept on explaining that another reason why Congressman Espaillat’s membership application hasn’t been approved had to with the fact that the Black Congressional Caucus holds a grudge against Espaillat for attempting to unseat retired Charles Rangel, who served unchallenged as congressman for 42 years.

Dr. Torres-Saillant also made reference to the degree of blackness between Rangel and Espaillat. Regarding Rangel he said: “Nor is he any blacker than Espaillat, because his papá is Puerto Rican.”

Dean’s Professor in the Humanities

Silvio Torres-Saillant, Professor in the English Department, formerly headed the Latino-Latin American Studies Program in the College of Arts and Sciences. He co-founded La Casita Cultural Center, an organization opened in the Near West Side of the City of Syracuse with the mission to create bridges of communication, collaboration, and exchange linking Syracuse University with the Latino population of the city and promoting the Hispanic heritages of Central New York. He has served in the core team of DK (Democratizing Knowledge), an initiative supported by the Chancellor’s Leadership Projects that promotes strategies for decolonizing the academy, and in the Syracuse University chapter of The Future of Minority Studies, a nationwide consortium of scholars working on efforts to foreground the ways of knowing and bodies of knowledge subjugated by the colonial transaction. He completed a two-year term as William P. Tolley Distinguished Teaching Professor in the Humanities.

Professor Torres-Saillant came to Syracuse after having founded the CUNY Dominican Studies Institute, a prestigious interdisciplinary research unit located in the City College of New York. He had his first full-time faculty position in the English Department of Hostos Community College, CUNY, and has held visiting appointments at Amherst College, Harvard University, the University of Cartagena, and the San Andrés campus of Colombia’s Universidad Nacional.

Torres-Saillant has served in the Delegate Assembly of the MLA, has chaired the MLA Committee on the Literatures of Peoples of Color in the United States and Canada and the selection committee for MLA Prize in Latino and Latina/Chicano and Chicana Literary and Cultural Studies, has served in the selection committee for the Senior Fulbright Scholar Program in Central America, Mexico, and the Caribbean, has formed part of the Board of Directors of the New York Council for the Humanities, inter alia. A member of the Editorial Board of the University of Houston’s Recovering the US Hispanic Literary Heritage Project, he serves as Associate Editor of Latino Studies (Palgrave) and has edited the New World Studies Series for the University of Virginia Press.

Research and Teaching Interests
Professor Torres-Saillant’s research and teaching interests revolve around some central concerns pertaining to the enduring legacy of the colonial transaction spearheaded by the Christian West starting over five centuries ago. They have to do with the relations of power that make bodies of knowledge unequal across regions, languages, and cultures of the world. They involve the disparate value attached in the academy to ideas and ways of knowing depending on the geopolitical location of their producers. They respond to the continuing monopoly that the Christian West holds over the authority to define the human. As such, his research and teaching projects touch on race, ethnicity, intellectual history, imperial violence, the problem of culture and civilization, diaspora, migration, the tension between the ethnic and the human, and the necessity to interrupt the logic of maltreatment that informs the corporate capitalist system spawned by the colonial transaction.

Recent Courses
Professor Torres-Saillant has recently taught “Literature of the New American,” a course that surveys the writings of American authors of Native, African, Asian, Hispanic, Jewish, Irish, and Italian descent; “Transatlantic Letters,” a course that traces the cultural history produced by the colonial encounter of Spanish and British settlers from 1513 to 1940 in the territory now known as the United States; “Literature of the Caribbean Diaspora,” a course that examines interconnections among the literary productions of Caribbean-descended writers from the United States, Canada, England, France, the Netherlands, and Spain; “Latino Fiction, “ a course that surveys the literary works of American writers of Hispanic descent from Maria Amparo Ruiz de Burton to Justin Torres; “The Latino autobiography,” a course that explores the difficulties involved in the study of life-writing and in placing Latino-ness as a stable social identity; and “Living in a Diverse Society,” a course that deals with diversity as an academic subject, designed for students in the Multicultural Living and Learning Community.